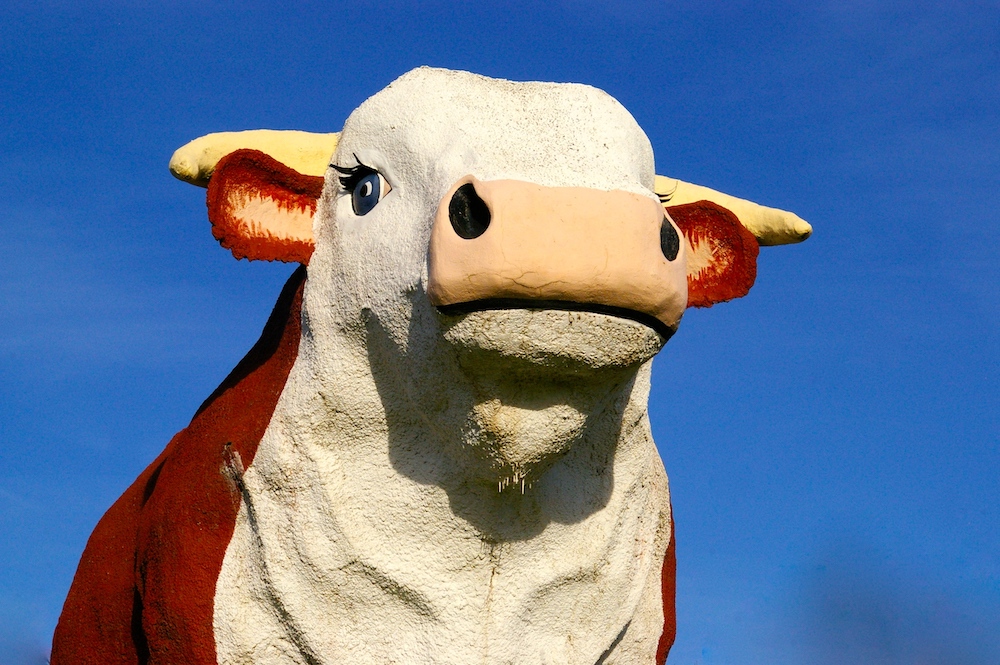 Whether you find it surprising or not, the Hawkeye State is a land full of immense attractions. From the World’s Largest Ball of Popcorn to the World’s Largest Manmade Grotto, choosing just one Iowa wonder to focus on was no easy task. But when I looked back on all the super-sized spots I’ve visited over the years, I realized a huge Hereford from Audubon, Iowa had already stolen my heart.

When he’s in need of a spruce, it takes 65 gallons of paint to cover Albert’s huge hide.

The History of Albert the Bull 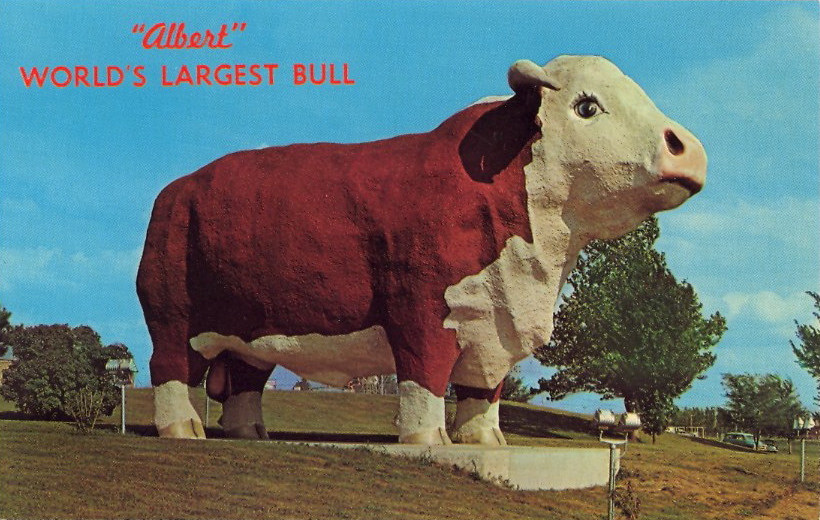 A Hereford with Heart

As you drive north on U.S. Highway 71, the expanses of rolling farmland quickly flash into view. In the blink of an eye, you are nose to nose with Albert the Bull. Towering 30 feet over the sprawling Iowa countryside, the concrete bull is a symbol not only of the area’s cattle raising past but also of its hopes for future generations.

The Audubon County Tourism Office doesn’t keep exact visitor numbers. But it’s estimated that more than 20,000 people stop in the sleepy town each year to visit Albert the Bull. With a population of just over 2,000, Audubon seems the perfect place for a 45 ton, blue-eyed beauty like Albert to call home. The first time I visited him, it’s safe to say that I acted like a giddy small child. When it comes to roadside attractions, I’m a pretty big dork.

But after talking with people who helped bring the huge Hereford to life and have worked to maintain him ever since, I’ve come to realize that my initial reaction probably had a little more to do with Albert than it had to do with me.

A History of Cattle Feeding

Named after the famous ornithologist—a studier of birds—and artist John James Audubon (yes, the same one as the Audubon Society), the western Iowa town of Audubon has a long history of cattle raising. As the industry grew during the early 20th century, the most lucrative (and closely located) cattle market became Chicago. So, beginning in the early 1950s, Iowa farmers would ship their cattle across the state to market via the Northwestern Railroad. On each cattle voyage, the shippers and businessmen endured drafty, uncomfortable rides across the plains. Oftentimes they rode in the train’s caboose during the chilly late fall and early winter months.

That is, until 1951, when Albert Kruse of Audubon’s First State Bank told colleagues he would only accompany them on the journey to Chicago. That is, only if and when they obtained a Pullman rail car for the cattle train. And thus, Operation T-Bone was born.

That year 50 carloads full of cattle headed by three modern sleeper cars full of businessmen traveled to the Windy City. Their journey caused surprising acclaim. In fact, the story made the front page of the Chicago Tribune and was even picked up internationally by the London Times. After the first year, the partnership was transferred to the Rock Island Railroad and continued for many years.

So what does this have to do with Albert the Bull?

Time passed and transportation changed. The Chicago packing houses eventually closed and Operation T-Bone ceased to exist in the same way. In 1963, the Audubon Junior Chamber of Commerce (also known as the Jaycees) came up with the idea for the huge Hereford. They wanted to pay tribute not only to Operation T-Bone but also to the region’s cattle raising history as a whole.

To find out more about how Albert came into being, I called Duane Schmidt, the owner of Audubon-Exira Ready Mix. He’s also one of the original community members who agreed to help make the idea a reality. As I dialed his number, I couldn’t help but smile at the fact that a concrete contractor and mason was an incredibly helpful person to have in your corner when trying to construct a 45-ton Hereford.

Schmidt told me that Albert’s design was really the creation of Donald C. Olesen. He had the idea to create “basically just a copy of what they used for a model airplane structure, just so much more huge” and, obviously, cow-shaped. The building plans for Albert were drawn to life-like scale. In fact, his design was based on a small model bull sent to Audubon by the American Hereford Association in Kansas City.

“We had some people that thought we was absolutely crazy when we started all this,” Schmidt said. “As it went on though it was amazing how people started picking up on it and the amount of help we received from the community.”

Constructed around a steel frame and Albert was made from dismantled Iowa windmills, according to Eric Peterson’s The Great American Roadtrip. Albert the Bull was then covered in wire mesh then topped with three coats of concrete and an additional layer of cement to add texture.

The Jaycees managed to raise $30,000 for the project through various fundraisers and donations from agricultural partners from across the country. Schmidt can’t remember exactly how big the group of Albert’s supporters grew. But the Jaycees gained more than 100 new members that year.

“We had any number [of helpers] from farmers to businessmen in town to construction workers to just about everybody,” he said. “If you needed help and if you yelled enough, you’d have a bunch of people there. That’s just the way it is.”

The town named the statue in honor of the local banker and Operation T-Bone founder Albert Kruse. Albert the Bull was officially dedicated on October 21, 1964, to coincide with the 14th annual Operation T-Bone. Standing at 30 feet tall with a 15-foot horn span, Albert is an authentic Hereford right down to his toenails.

Over the years, Audubon’s World’s Largest Bull has had his fair share of publicity. Not only does he appear in the movie Beethoven’s 3rd but he also was an answer on “Jeopardy.” In fact, Albert even got a mention in “The West Wing.” His fame has even extended to one of the movie adaptations of Stephanie Meyer’s Twilight series. Albert the Bull appears emblazoned on a custom-designed square of a T-shirt quilt given to the main character by her mother.

In 2014, Albert the Bull celebrated his fiftieth birthday during Audubon’s annual T-Bone Festival, a celebration that includes a hamburger feed, fireworks, and more. Intrigued by the local legacy Albert has helped foster, I reached out to the head of Audubon’s T-Bone Committee, dubbed the Wagonmaster, and his wife, Becky, promptly emailed me back.

“I’ve been feeding cattle all my life and I’m still doing it,” Duane Sloth told me over the phone. “The T-Bone Committee is a local cattle feeding organization that was formed in the late ‘70s and now, somehow, I got to be the leader.”

“All money generated gets put back into the community in monetary or in beef donations. To fundraisers, little league, you name it,” Sloth said. “If anyone has a need it’s not very often we turn anything down if we have the funds to donate.” 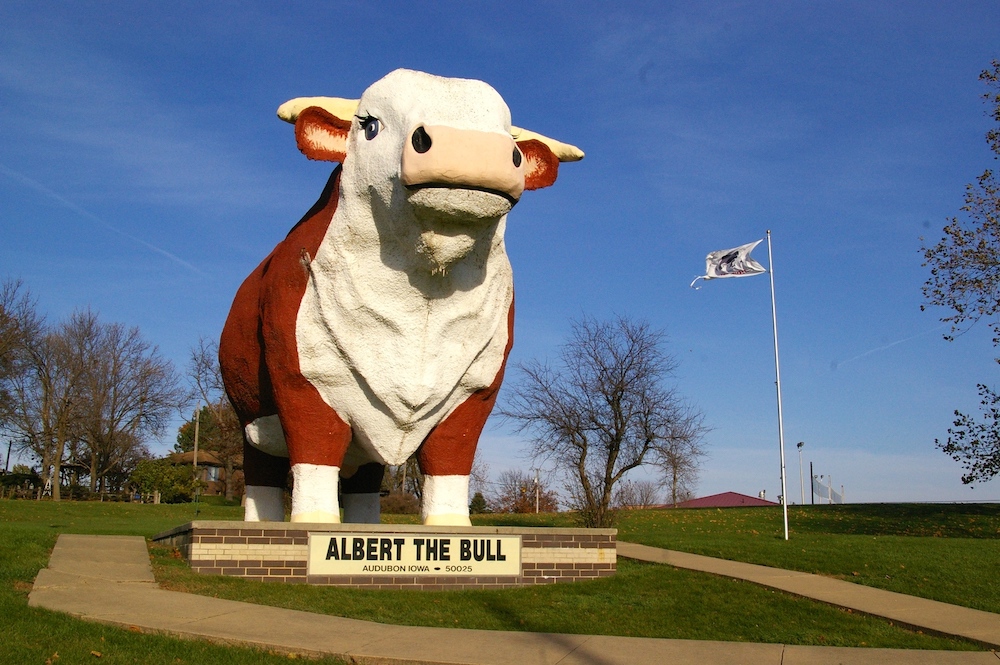 If you’re planning your own visit to the World’s Largest Bull, I recommend choosing a day you can also enjoy a picnic in Albert the Bull Park. Whether he’s your final destination or merely a stop on the way to bigger, kookier things, a visit to Albert the Bull is always the perfect choice. Be sure to stop inside the kiosk to the right of Albert. There you can listen to an audio recording about his personal history and even hear the huge Hereford moo.

If you’re visiting on a weekday during regular business hours, drive through town and stop in the Audubon Chamber of Commerce where you can purchase all of your Albert-themed souvenirs—from key chains and postcards to T-shirts and plush versions of Albert.

I would love to hear from you! Have you visited Albert the Bull? What’s your favorite “world’s largest” thing in Iowa? 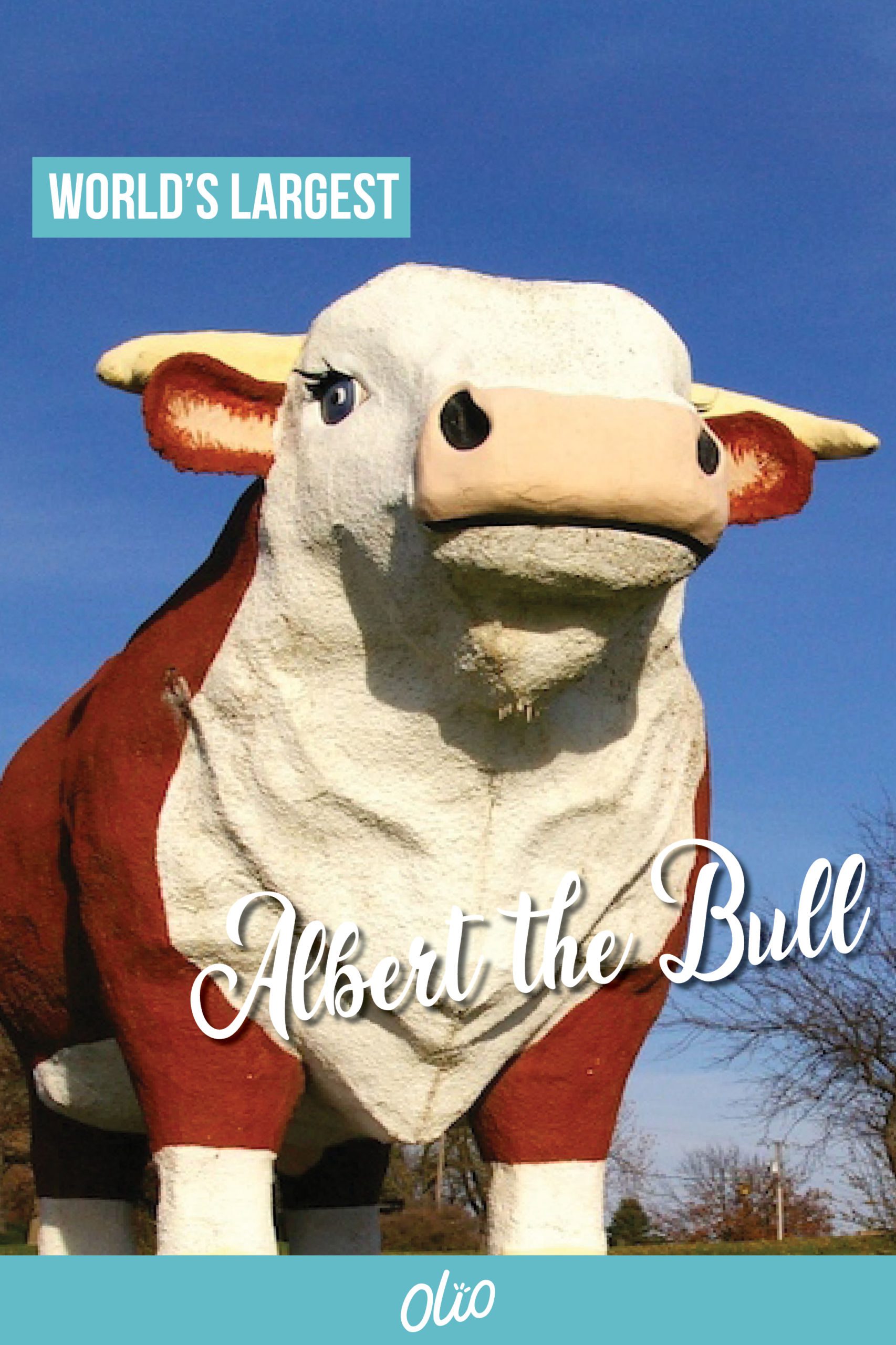 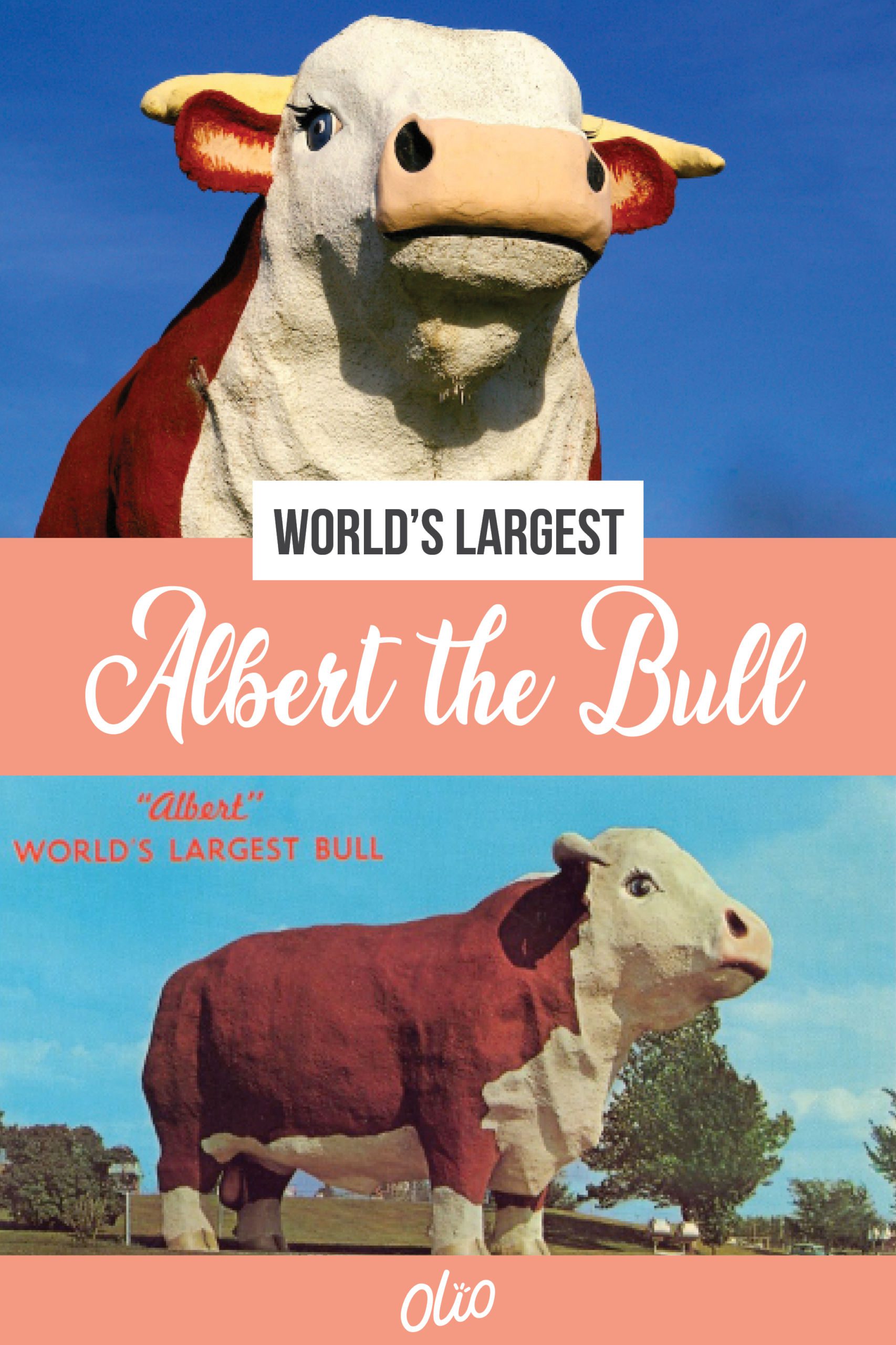 What a fun story. I’m all about preserving agricultural history and this story does just that!

Isn’t it? I loved learning more about this unique piece of the Audubon community. Thanks for reading!