I love a roadside attraction. But one you can spend the night in? Sign me up! The Wigwam Village Inn #2 in Cave City, Kentucky is one of only three remaining wigwam motels in the country. At almost 100 years old, this rustic motel is a classic piece of kitsch and Americana.

We had a super specific reason for visiting the motel. But this is the perfect place to spend the night whether you’re just passing through or exploring Mammoth Cave National Park.

History of the Wigwam Village Inn #2

Inspired by Tee Pee Barbecue—built by James H. Estes in 1927—in Long Beach, California, Frank A. Redford built his first teepee in Horse Cave, Kentucky in 1933. Two years later, he added six additional teepees for travelers to stay in to his gas station complex. But he had bigger dreams for his hospitality business.

In 1937, he built the Wigwam Village Inn #2 in Cave City, seven miles south of his original location. The kitschy roadside motel includes 15 rooms, two public restrooms and one large, central teepee that was once used as a restaurant and gift shop.

While the name “wigwam” doesn’t accurately describe the shape of the motel rooms, Redford didn’t like the word “teepee” and worried travelers wouldn’t know how to spell it. Despite the inaccurate appropriation the name stuck.

Redford patented the design of the unique motel rooms in February 1936 and ultimately franchised the concept. By the late 1940s there were seven wigwam motels across the country in Kentucky, Louisiana, Florida, Alabama, Arizona and California. Today the only other two remaining wigwam-shaped motels are located along Route 66 in Holbrook, Arizona and San Bernardino, California.

In 1988 the Wigwam Village Inn #2 was added to the National Register of Historic Places.

Fun Fact: The teepee-shaped motels were the inspiration for the Cozy Cone Motel in Pixar’s Cars movies.

The Wigwam Village Inn has 15 guest rooms—10 with one double bed and five with two double beds. The layout varies slightly depending on the room type, but each room has its own bathroom, wifi, cable TV and air conditioning.

I’m not a tall person (5’2″) by any means, but if you’re anywhere close to 6-foot you’re going to want to watch your head. Some of the wigwam’s doorways are a little short, especially into the shower.

The rooms are definitely dated, but overall, we found ours to be clean and comfortable. I did love original touches like the red zigzag tile in the bathroom though! If you plan to book a room, remember it will be for the kitsch and novelty—not the high-quality amenities.

Plan Your Stay at the Wigwam Village Inn #2

The Wigwam Village Inn #2 is currently open year-round and is a great place to stay whether you’re just passing through or spending some time in Cave City.

In addition to the amenities in the individual rooms, the property has a grills, a picnic area and small playground.

To book at room, visit the motel’s website. Rates vary depending on the season.

I would love to hear from you! Have you stayed in a kitschy roadside motel? Would you visit the Wigwam Village Inn #2? 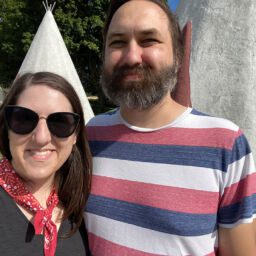 That Time We Almost Bought a Wigwam Motel During a Pandemic

Yes, you read that correctly. Six months into a global pandemic, Josh and I considered imploding our lives in Iowa to move to Kentucky to buy and run a wigwam-shaped motel.

My wife and I stayed there when we were engaged 26 years ago, we are planning on coming back for our 25th anniversary, they really take you back, a blast from the past.

It’s such a cool way to step back in time! I hope you get to visit again soon to celebrate your anniversary. Safe travels & thanks for reading!

Took my daughter for her 13th birthday. We loved it! Comfy cozy quiet perfect place for relaxing. Went to cool cave in town as well. Highly recommend!!

Yay! I’m so glad to hear that. We hope to visit again sometime in the future to experience more of the area and Mammoth Cave National Park. Thanks so much for reading & safe travels!