Disclosure: The New Ulm Convention & Visitors Bureau facilitated our visit to the Hermann Heights Monument. However, all opinions are my own. 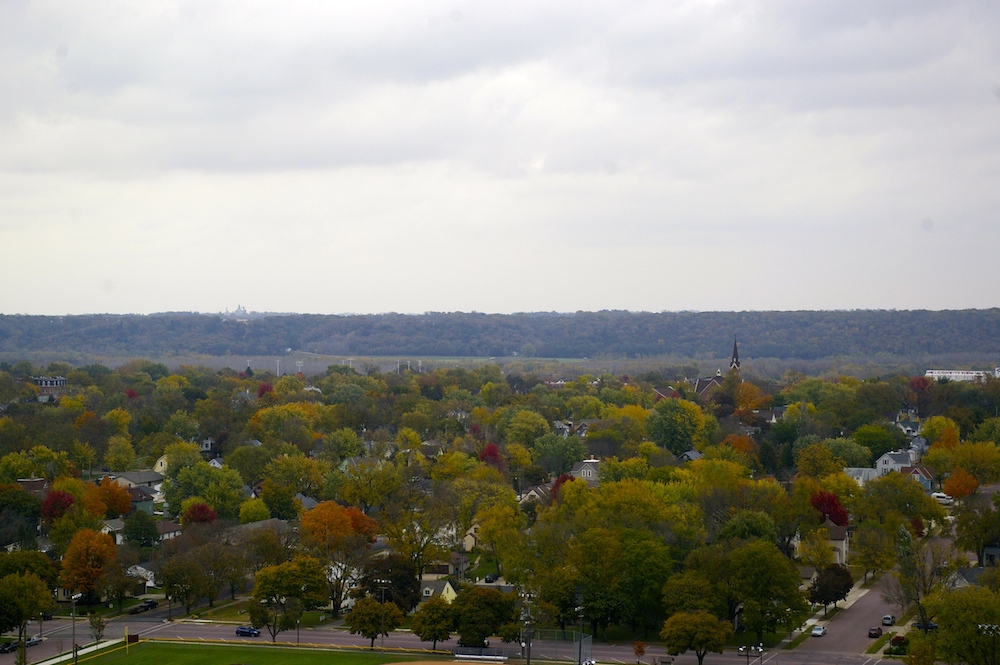 During our autumn visit to New Ulm, Minnesota, we enjoyed the beautiful fall leaves, sipped Schell’s seasonals, and explored the historic small town. We also had the opportunity to meet a local legend—Hermann the German.

Towering 102 feet over the town, Hermann the German is a benevolent presence over this southern Minnesota town. During our visit we caught glimpses of Hermann everywhere—from commemorative pins to the logo of the local newspaper, The Journal. But none was more iconic than the monument erected to this Germanic hero in Hermann Heights Park. 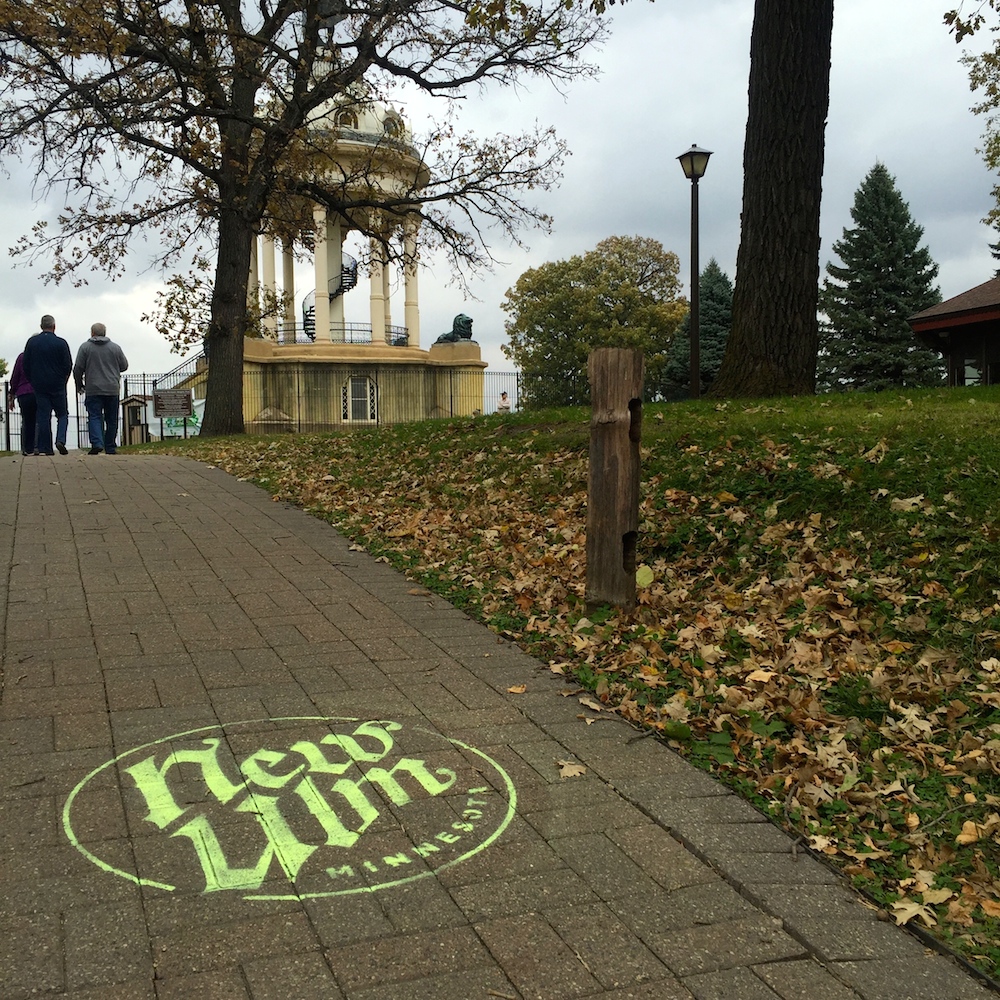 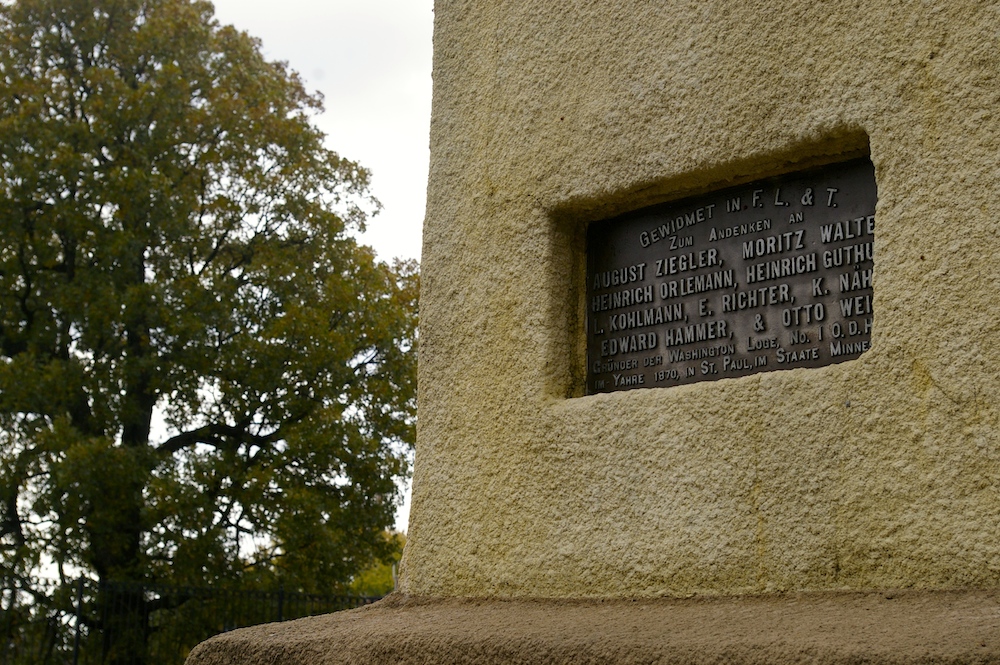 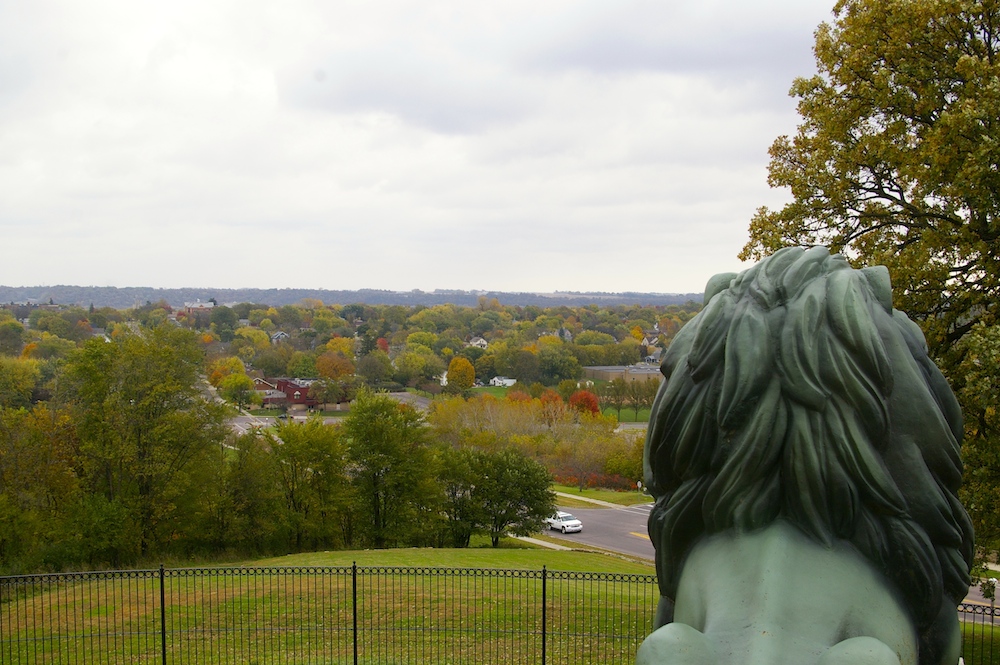 We began our exploration in the monument’s interpretive center where we learned about the lore behind Hermann the German and story behind the statue’s construction. I especially enjoyed the collection of Hermann the German memorabilia both from local and international sources.

Afterward, climb the concrete steps to the monument’s rotunda lined with bronze lions, and make your way up the iron spiral staircase to the dome. While the stairs aren’t the steepest you’ll encounter, they’re fairly narrow and can be tricky to navigate if other visitors are coming down.

The top observation deck of the Hermann Heights Monument is not for the faint of heart or fearful of heights. If you’re brave, climb the steep stairs—watch your head!—and pop through the trapdoor to stand at Hermann’s feet. For visitors who are daring enough to climb to the summit, the reward is a gorgeous panoramic view of New Ulm. Even though it was particularly windy when we visited, I was glad I braved the climb to enjoy the beautiful autumnal leaves from the top of the monument. 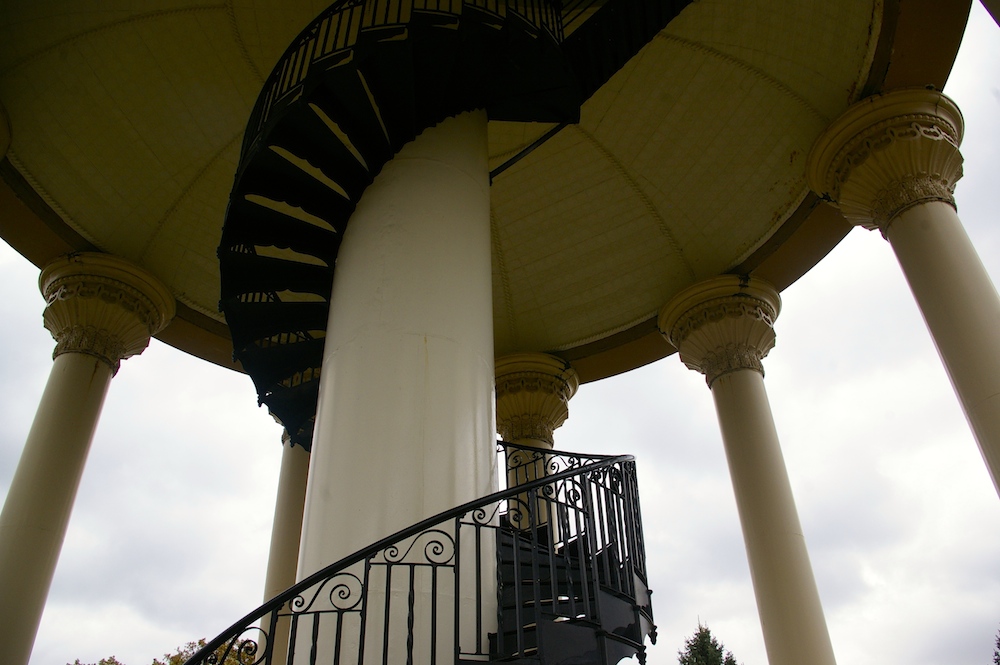 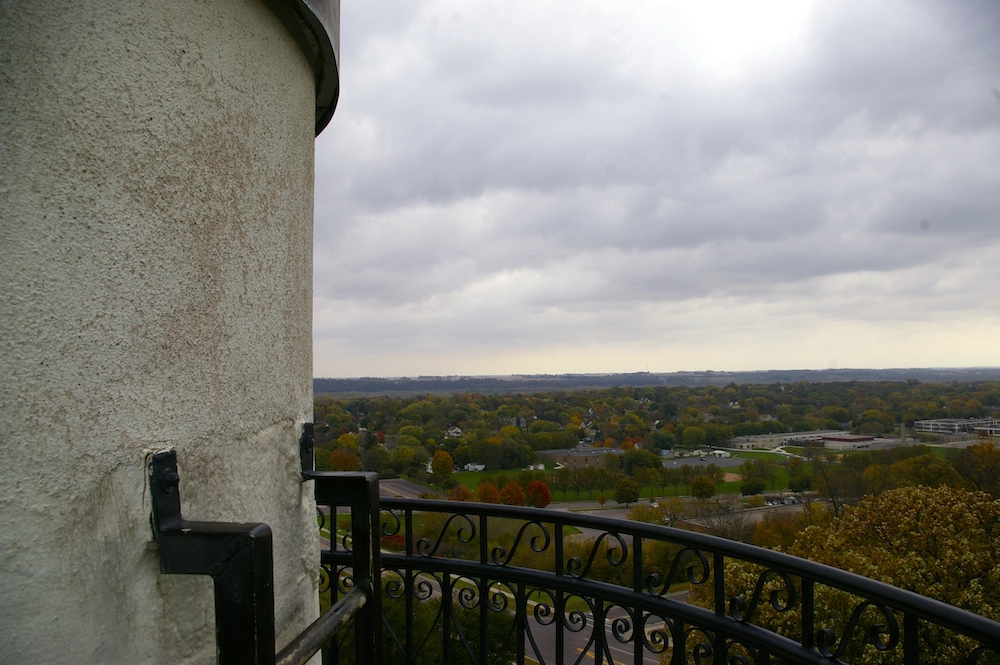 The Folklore of Hermann the German

Hermann the Cheruscan, also known by the Latin name Arminius, was a Teutonic chieftain. In 9 A.D. he led a coalition of Germanic tribes to victory over the Romans in the Battle of the Teutoburg Forest. The hero who is now more commonly know as Hermann the German has long been a symbol of Germanic patriotism.

In traditional folklore, Hermann was widely known as a freedom fighter and an opponent of Roman tyranny. By the 18th century Hermann became deeply tied to German national identity and evoked feelings of fidelity, freedom, and honor. In the early 19th century when German immigrants became traveling to America, they brought their connection to Hermann with them.

In 1875, a monument honoring Hermann the German was erected in Detmold, Germany. It was more than a decade later that New Ulm architect Julius Berndt proposed that the local chapter of the Order of the Sons of Hermann create an American version in their new Minnesotan home. A workshop in Salem, Ohio was commissioned to create the statue, and in 1889 it was shipped to New Ulm. However, it wasn’t until 1897 that the Sons of Hermann secured the remaining funds and completed the monument. At 32 feet high, the statue of Hermann the German weighed roughly 7,000 pounds of steel piping and hammered copper.

After World War I, the New Ulm chapter of the Sons of Hermann disbanded, and in 1929, donated the monument and the surrounding land to the City of New Ulm, which manages the property today. In August of 2004, the interior and exterior of the monument underwent restoration. After damage from vandalism, weather conditions, and previous repair attempts, the statue’s head, boots, and other areas were all in need of repair.

Today, Hermann the German has been restored to his former glory, and watches over the city of New Ulm more than 2,000 years after his famed victory.

Plan Your Visit to the Hermann Heights Monument 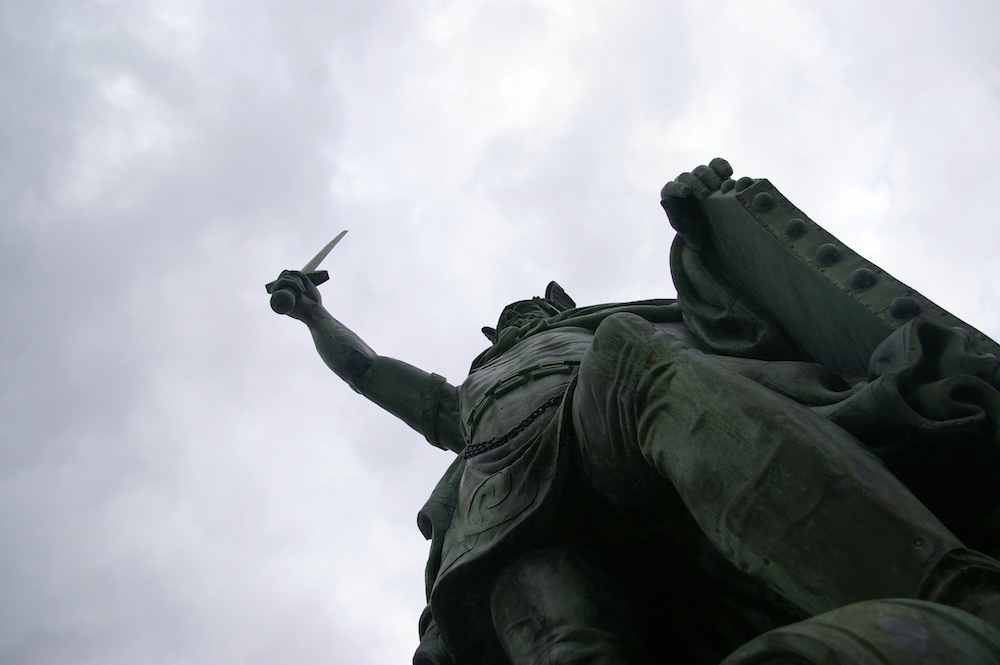 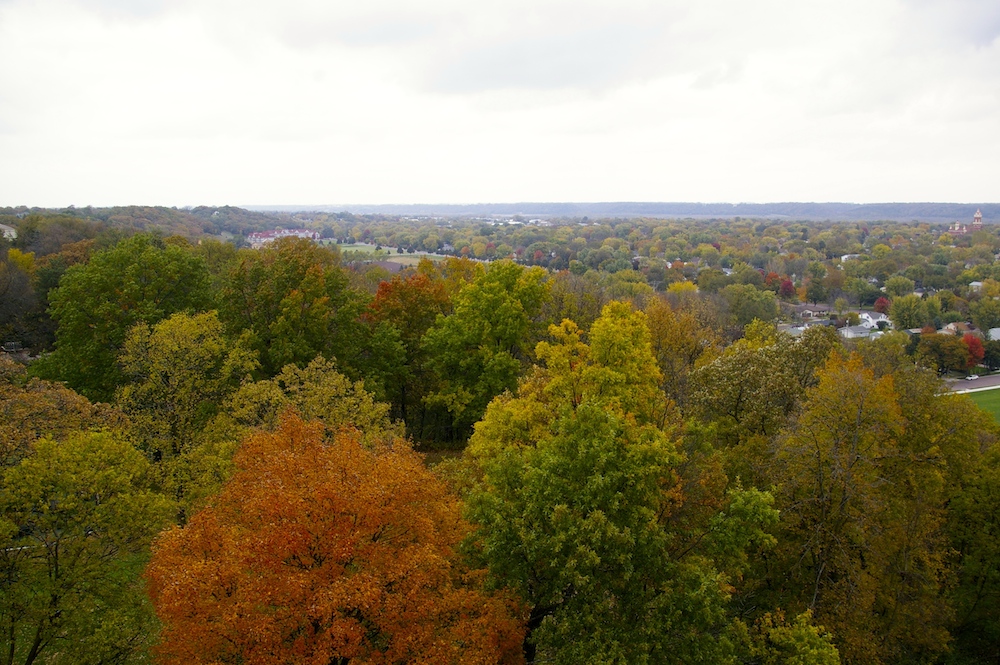 If you’re visiting New Ulm, a visit to Hermann the German is essential. Not only is this attraction economical, but it’s also a fantastic opportunity to learn about the city’s Germanic history. After you explore the monument, Herman Heights Park is a wonderful place for a picnic. Bring your lunch along and enjoy the views of New Ulm from the hilltop.

The monument is open daily Memorial Day through Labor Day as well as Saturdays and Sundays in May and September. Seasonal visitors can experience this bit of history on Fridays, Saturdays, and Sundays the first three weekends in October.

Admission: $2.25 per person / Free for children under five years old

I would love to hear from you! Have you been to New Ulm, Minnesota? Have you visited Hermann the German? 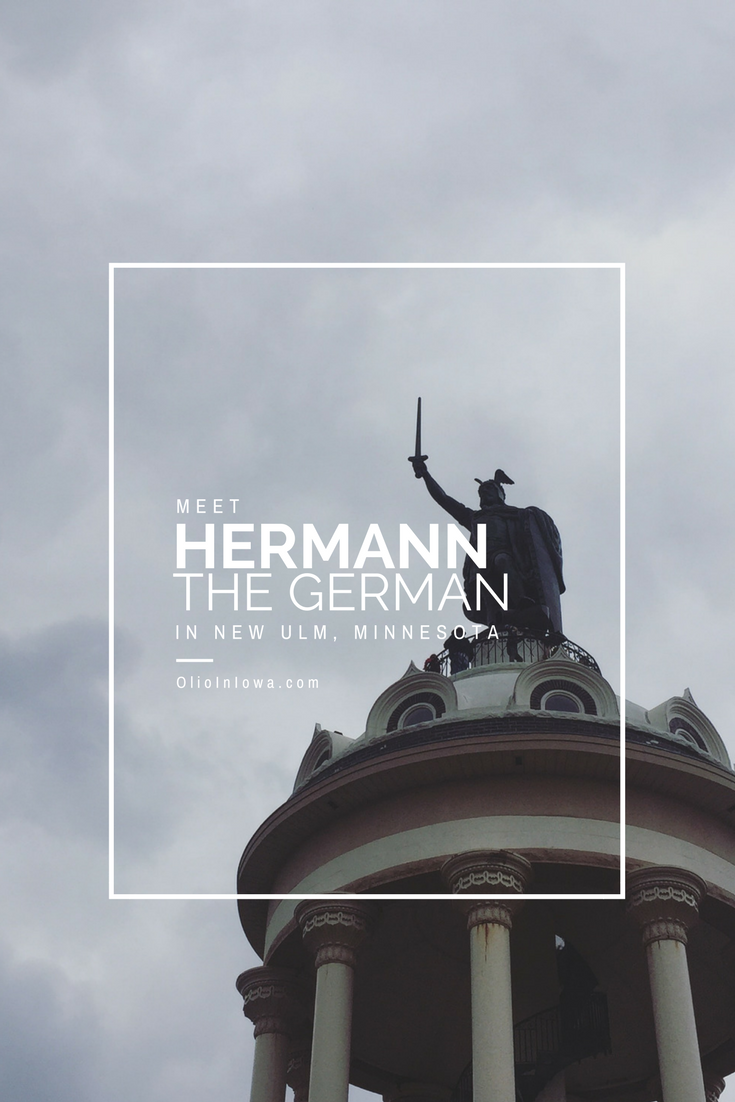 Great insight into New Ulm! Thanks for posting!

Thanks for reading, Laura! We had a wonderful time learning about New Ulm’s history.

We always drove through New Ulm on the way to our grandparents farm, and as a kid and I thought Hermann was God.

Hermann definitely has quite the presence in New Ulm! Thanks for reading.

[…] of the pretzels and cheese by climbing the 99 steps to the top of the Hermann Heights Monument.  Get to know Hermann the German, the iconic figure who presides New Ulm. His origin story is truly unique and the monument provides […]