One of my favorite offbeat attractions in Iowa is Albert the Bull. Not only is this 30-foot tall Hereford a fun road trip stop, but he’s also the World’s Largest Bull.

Iowa’s attempt at the World’s Largest Popcorn Ball has been upstaged a number of times now. But Sac City, Iowa currently holds the record for this particular world’s largest thing. In 2016, the community came together to create the current World’s Largest Ball of Popcorn. Using a plastic form created by Lundell Plastics as a cradle to support the popcorn during its construction, the completed ball weighs 9,370 pounds and stands at more than eight feet tall.

Would you believe that Iowa is home to the World’s Largest Cheeto? The sizable snack was originally found in a bag of Cheetos in Hawaii by Navy officer Mike Evans in 2003. The Cheeto is a chunky 3/5 of an ounce and is slightly larger than a silver dollar. For reference, the typical bag of about 40 Cheetos weighs 2 1/8 ounces.

Evans put the Cheeto on eBay and bidding reached over $1 million before the auction was shut down. Ultimately, Evans decided to give the World’s Largest Cheeto to the small town of Algona, Iowa after local radio DJ Bryce Wilson started a campaign to bring the Cheeto to Iowa. It now calls a local restaurant, Emerald’s, home and sits atop a purple velvet pillow inside a display case. Though the Cheeto is no longer as in tact as it once was. In fact, the staff at Emerald’s jokingly refers to it as the “crumb of Carl.”

If you’ve never been to the Grotto of the Redemption, you are seriously missing out. Listed on the National Register of Historic Places, the Grotto attracts more than 100,000 visitors every year, and was constructed using an estimated $4.3 million of stones and precious gems.

Located in Pocahontas County, this unique attraction was built in 1956. While the actual Pocahontas likely never visited Iowa, Senator John Howell, formerly from Virginia, proposed the name for the county in 1850.

However, the idea to build the World’s Largest Pocahontas came about 100 years later. In the 1950s, Senator Albert J. Shaw and his son, Frank, had the idea to construct the statue. The World’s Largest Pocahontas was designed by W.C. Ballard of Nevis, Minnesota and was constructed by Pocahontas local Marcell Moritz. The cement statue stands at 25 feet tall and is seven feet wide at the base of her skirt and tops of her shoulders.

While there are buildings and water towers painted to look like strawberries, Iowa is home to what is technically the World’s Largest (fake) Strawberry. This 15-foot tall strawberry sculpture was designed and built by Harold Lange of East Dubuque, Illinois while he was working for the ad agency Frank Hardie in Dubuque in the 1960s. Today you can find it on display in front of the Strawberry Point City Hall.

If you’re curious—because I was—the world’s largest edible strawberry was grown in Japan. The fruit grew to be palm-sized and weighed 250 grams with an approximate circumference of more than 10 inches.

From a barber shop and dental office to dog groomer and movie theater, there are all sorts of unusual amenities at this truck stop. You can also stretch your legs while visiting the Iowa 80 Trucking Museum.

While Stanton’s World’s Largest Swedish Coffee Pot no longer towers above the small town, the iconic water towers still call the southwest Iowa community home. A symbol of Swedish hospitality, the giant coffee pot is still on display outside the Swedish Heritage and Cultural Center. The matching World’s Largest Swedish Coffee Cup, complete with saucer, still serves the town as a water tower.

Erected in 2006 as a protest against raised speed limits in the area, the World’s Largest Wooden Nickel is a unique piece of protest art. The roadside attraction took six months to create and weighs in around 4,000 pounds. Today you can see it along the roadside in Iowa City.

I would love to hear from you! Have you visited any of Iowa’s world’s largest things? What are your favorite quirky attractions in Iowa? 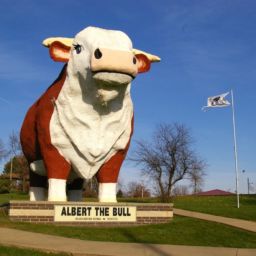 I never knew about the cheeto! Many of the others I have visited. Other “largest” or “quirky” attractions I think about in Iowa are the Matchstick Marvels Museum, Snake Alley, Crystal Lake’s World Largest Bullhead Fish and Brandon Iowa’s Largest Frying Pan

The Cheeto is such an unusual one! Those are some fantastic other offbeat attractions. I love how many wacky things there are to see in Iowa! I still need to make it to Crystal Lake’s World’s Largest Bullhead Fish!